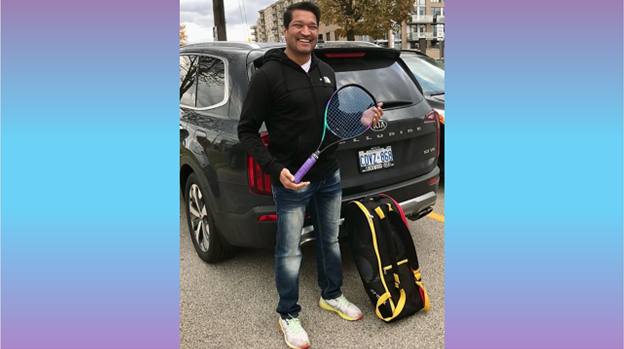 Posted by Brandrocket on 1 November 2022 | Featured

Dave Sharma will tell you: “Tennis can change your life!”

After completing an MBA at University of Alberta in Edmonton, Dave Sharma had settled into a high-pressure job with squash as the convenient stress-release-and-fitness regimen. Cricket had been a pre-occupation in earlier years but proved impractical as a year-round endeavour.

The start of covid in early 2020 found him in Burlington, with most activities and facilities shut down. But walks in the park with his wife and young daughter led to the discovery of open-access tennis courts.  At the urging of a friend, a vintage racquet was retrieved from the garage and a new life chapter began. It’s a story that has unfolded countless times in parks across the world in the past two years: when all else failed, tennis was there: accessible, inexpensive, safe and friendly.

It took very little time for Dave to discover and embrace all aspects of the joy of tennis: physical, mental and social. With an athletic background and an analytical mind, his game developed quickly. Tournament broadcasts on TV, along with YouTube videos, brought endless ideas and suggestions for improvement. The Merchant of Tennis provided guidance on equipment, and playing partners were recruited from among friends and family.

By the fall of 2021, a winter membership at Burlington Fitness & Racquet Club was in order, followed by a summer membership at Burlington Tennis Club. Everywhere Dave went, he was meeting interesting people and encountering new tennis experiences. Before long, he was recruited for a Burlington TC team in the Lakeshore League. Although singles had been his preferred form of exercise, the game of doubles presented new challenges… and new revelations, as “older” players often had skills and experience that got the best of younger and stronger players.

When Community Tennis Leagues was announced in August, Dave jumped in right away. He’s enjoyed both sessions, meeting players he wouldn’t have encountered otherwise. One memorable match had reached a score of 6-4 4-6 6-6 as the lights went out for the night. When the players re-convened a few days later, it took Dave’s opponent only one more point to secure the victory for an official CTL score. They opted to continue playing another full match, this time with Dave coming out on top.

Dave is hoping to introduce his daughter to tennis next summer and is coaxing his wife to become involved as well. He sees the social support that comes with playing in groups, as well as the happiness and sense of satisfaction from improving our skills. They had a wonderful time at Family Day on the first weekend of the National Bank Open, thoroughly enjoying the atmosphere with so many other families and young children. Dave made his way back to the NBO for the semi-finals and finals, then traveled to New York for the US Open as well. A mega experience for any tennis fan!

Of all the challenges presented by tennis, Dave admires those players who keep their composure when they’re between the lines. He savours the mental calmness and peace that come from total concentration on the court. He’s impressed by the culture of tennis, with friends-family-fun being in the forefront. And he’s just getting started … with another 50+ years of tennis ahead of him!